5 Off the Beaten Path Ski Destinations

With the cost of lift tickets rising each year at popular North America ski resorts and crowds continuing to grow, a ski or snowboard vacation can include its fair share of headaches. Look off the beaten path for some unique ski resorts and take advantage of fewer crowds in these quaint mountain towns.

END_OF_DOCUMENT_TOKEN_TO_BE_REPLACED

"This is a view from the streets of Taormina, Sicily, adjacent to the gorgeous pebbly beach of Isola Bella, a marine reserve known as 'The Pearl of the Ionian Sea'. Snorkelers and divers will find Isola Bella's clear waters home to moray eels, starfish, sea horses, octopus, stonefish and several other small, colorful sea creatures.

END_OF_DOCUMENT_TOKEN_TO_BE_REPLACED

Bathing with and without Swimsuits in Budapest's Thermal Waters

Bliss and Patrick left their jobs in finance and law in New York City to travel around the world with their two-year-old son, Jude. They blog about their adventures traveling with a toddler at Around the World with a Two-Year-Old. Among other adventures, the family has taken the Trans-Siberian Railroad from Beijing to Moscow, and recently spent a week in India. We here at Global Basecamps authentic travel service are happy to share this guest blog with you, enjoy!

END_OF_DOCUMENT_TOKEN_TO_BE_REPLACED

Looking for a unique destination to celebrate New Year's Eve? Here are some of our favorite locations to ring in the New Year!

New Year's is one of the biggest celebrations for Brazil tours, and one of the biggest beach parties in the world.  Most of the festivities take place in Copacabana and attract millions of people every year.  During the day many go to pay homage to the Afro-Brazilian goddess Iemanjá by placing offerings in the sea.  Music is played throughout the day, but the party kicks off around 7 p.m. when live acts and DJs begin on the official stages. There is live music and dancing on the beaches and a spectacular fireworks show to ring in the New Year.  One of the traditions is to wear white on New Year’s Eve, as it is considered a lucky color.  Expect to be sprayed with champagne around midnight!

Hoping for a warm New Year’s Eve? Australia Tours in Sydney is the place to be.  The entertainment begins early in the afternoon and ends with the grand finale at midnight, an extravagant fireworks show set off from the arch of the Sydney Harbor Bridge.  The pre-show entertainment includes aerial displays and an indigenous smoking ceremony that will cleanse the harbor of negative spirits, as images projected on the Sydney Harbor Bridge begin the New Year countdown.   There are 9 p.m. family fireworks followed by the Harbor of Light Parade, where boats decorated with lights cruise around the Sydney Harbor.  With a finale that includes around 80,000 fireworks, this New Year's celebration is sure to be unlike anything you’ve ever seen.  Travel to Sydney this holiday season to be in the first major city to toast to the New Year!

END_OF_DOCUMENT_TOKEN_TO_BE_REPLACED 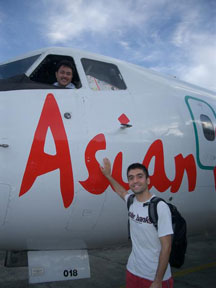 If you empathize at all with my new must-get-to-Turkey-now plan, you’ll have no problem understanding what drew me to Anil of FoXnoMad.com (He’s traveled there extensively). Even if you aren’t, the fact that he is sponsoring a contest that could get you 6 nights stay and airfare to almost anywhere of your choosing, is enough reason to read on. Beyond that, Anil earns the proud distinction of “Best in Travel Blogs” because he’s serious about blogging and it shows. Not to mention, that fact that he is a formally educated anthropologist and self proclaimed former computer hacker (the good kind) gives a nifty twist to his travel insights.

Global Basecamps: When and how did you get hooked on travel?

FoXnoMad: I’ve been traveling my entire life and suppose my curiosity to do so is strongly influenced by my parents, both of whom are journalists.

Global Basecamps: You are running an amazing “Live the Backpacker Life” contest. Can you tell us a bit more about it?

FoXnoMad: I want to give the opportunity for one of my readers to take a backpacking trip to most anywhere they want in the world. It’s a bit of a role-reversal. [Before October 5th] create a 3-5 minute travel video guide about a specific aspect of a given city and be the one traveling.