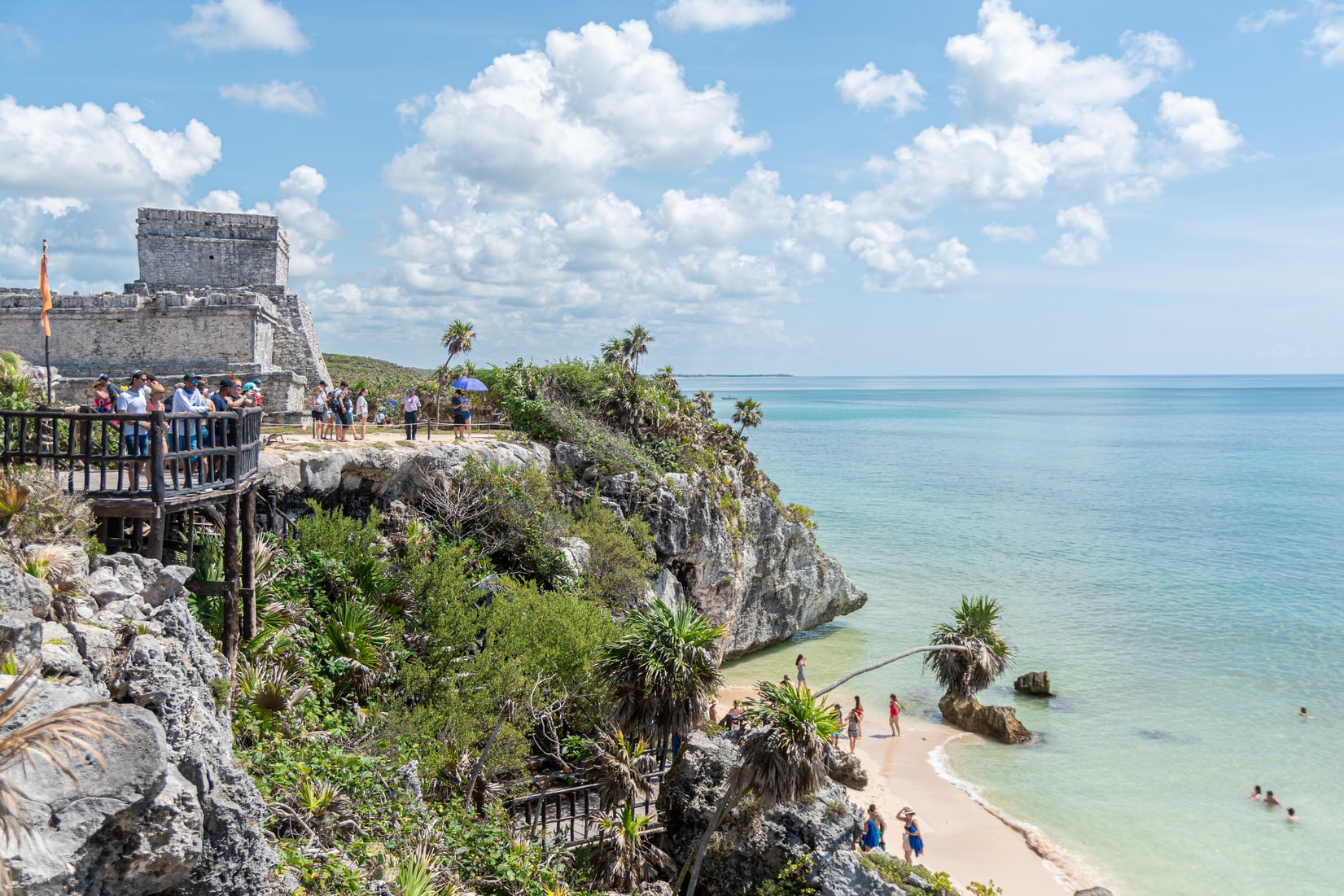 Tulum, once considered an off-the-beaten-path destination on the southern end of Mexico’s dazzling Caribbean Coast, has become a world class tourism region with stunning beaches, a range of budget, boutique, and deluxe eco-resort options, and those famous Tulum Mayan Ruin.

In the beginning, Tulum was a place for backpackers mostly and had relatively little to no infrastructure for travelers. The intrepid hung their hammocks between the swaying palm trees, pitched their tents, and quietly enjoyed the white sand beaches, crystalline waters, and virgin cenotes with few others besides the nesting sea turtles and other abundant wildlife.  As word spread of spectacular, secluded beaches and solitude, Tulum became a haven for nature lovers, yoga practitioners, scuba divers, and those looking to escape the mass tourism that enveloped Cancun and then spread down the Riviera Maya. Today, Tulum continues its evolution and now welcomes trendy travelers with a full array of boutique hotels, vegan restaurants, health spas, and even a nightlife scene featuring dance parties with international DJs!. Still relatively off the grid and with only sporadic cell phone coverage (at least on the beach), change has come quickly to Tulum, but it still retains that wild bohemian vibe.

Tulum’s explosive growth has put an immense strain on the town’s existing infrastructure, causing issues with sewage, trash disposal, and even wildlife conservation. Properties along the beach road are all off-grid, and as a result, will often cut corners with gas-powered generators or improperly disposing sewage. Set on a strip of beach in front of the Caribbean and surrounded by the jungle to the east, Tulum archaeological site to the north, and Sian Ka’an Biosphere Reserve to the South, Tulum really is a finite resource. Luckily, there are some eco-friendly and sustainable lodging choices that are trying to tackle these problems and our Mexico Travel Specialists can guide you to the best ones. We also work with a number of private villas here, which are a good option for family and friends in a post-COVID world.

Between the 13th and 16th centuries, Tulum was one of the most important trading and religious centers of the Yucatan Peninsula. Nowadays, the ruins near Tulum are one of the most important archaeological sites in Mexico.  During its heyday, Tulum served as a point of defense against invaders from both the land and sea, and also as a port of call for the maritime commerce that thrived along the coast. It is the only walled settlement the Maya built and the only one by the edge of the sea. Tulum served as a major connecting point between the Yucatan Peninsula and the Gulf of Mexico with the Mayans of Honduras and Central America. Goods like salt, cotton, quetzal feathers, jade, obsidian, flint, honey, cacao, and copper tools were traded here. Protected by the jungle of Quintana Roo, the site survived the general Maya collapse and was largely left untouched by the Spanish. 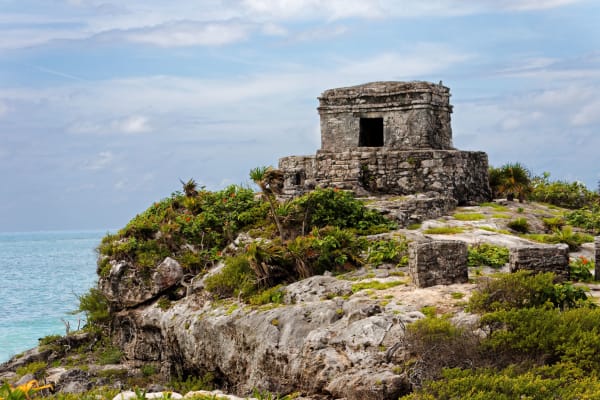 The largest structure here is the Castle (El Castillo), a handsome pyramid perched on the edge of a cliff high above the pearl-white beaches below. The castle may have served as an ancient lighthouse for sailors. When torches were lit, canoes were guided through the coral reef to the trading beach down below the city. There are serpent motifs carved into the upper rooms, and the building was originally painted red and covered in stucco. From here one can see most of the ancient ruins, as well as a spectacular view of the coastline. The most well-preserved structure at Tulum is the Temple of the Frescoes, which was used as an observatory for tracking the sun. There are several carvings found here and the outer temple has sculptures in three niches, including a central figure representing the “diving” or “descending” Mayan god  and human figures carved into the frieze. Other ruins at Tulum include the House of the Columns (a building with 4 rooms and a series of large columns) and the House of the Halach Uinic (the house of the high priest of Tulum).

The best time of day to visit the Ruins of Tulum is early morning or late afternoon (opening hours are between 8AM and 5PM). The only way to beat the crowds and the heat of the day is to get there right before it opens. Many tour buses from Cancun and Playa del Carmen will arrive around 9:30AM and the most busy and hottest part of the day is between 10AM and 2PM.

It only takes about 1.5-2 hours to explore the ruins, but many make a day of it by spending the afternoon on the beautiful beach below. Be sure to bring sunscreen and plenty of water, as the site does not have much shade. You are not allowed to climb on these ruins or go inside the buildings, but the views alone are worth the visit. 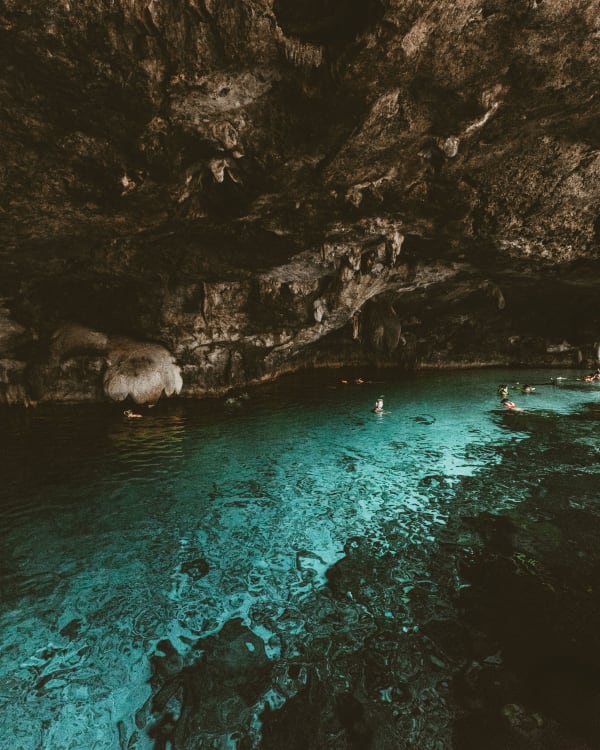 Tulum is also famous for its cenotes (fresh water sinkholes that allow access to the amazing subterranean river system and caverns that criss-cross the Yucatan Peninsula). Cenotes are a big draw because in addition to offering the opportunity to refresh in their fresh and cool waters in the middle of a hot day, they harbor mysterious clues and vestiges of Mayan rituals and history.  Exploring by foot, swimming, snorkeling and even SCUBA expeditions for the truly intrepid (and certified!) are all options to literally scratch beneath the surface of this dynamic region.

Sian Ka’an Biosphere Reserve to the south offers one of the largest and most important protected areas in the Americas and offers the nature inclined traveler first class opportunities for bird watching, along with hundreds of other species, many of them unique to the region. You can also visit the small but interesting Muyil archaeological site within the reserve and explore its labyrinth of channels and canals amongst the mangrove and wetland estuaries with local Mayan community members who are making good on the promise of ecotourism.

Other ruins near Tulum include the impressive Coba archaeological site (only 40 mins away). The adventurous and hidden Coba ruins encompass gorgeous jungle scenery and climbable temples. Bikes are available for rent so visitors can explore the large ancient city with ease. The Coba ruins are the site of the largest network of stone causeways and roads in the ancient Mayan world. Steep steps lead up to the top of the Nohoch Mul pyramid, which at over 130 feet  is the tallest Mayan pyramid on the Yucatan Peninsula. Another less-crowded and peaceful ruin to visit is Ek Balam, a 2-hour drive from Tulum. The Ek Balam site has several large structures including the tall main pyramid of El Torre, adorned with beautifully preserved carvings. Excavation only began in the 1990s, and much of the site remains untouched. These Mayan pyramids can be climbed and are a great way to experience ancient Mayan culture without the crowds found at Tulum and Chichen Itza.

With so many options for natural, cultural, historical, and adventure experiences it’s no wonder that Tulúm is a hotspot for travel these days.  Tulúm is holding true to its origins as a crossroads trading post: between the intensive development to the north and pristine nature to the south; designer hotels and thatched roof bungalows; hipsters and hippie backpackers. To find out how to incorporate Tulum into your custom itinerary, contact one of our Mexico Travel Specialists and check out some of our sample itineraries on our Mexico Tours,