Things to Know Before You Go to Ecuador

Ecuador is one the most diverse countries in the world, with snow-capped volcanoes, tropical beaches, and lush jungles. The diverse topography allows travelers to easily venture to different climates within a matter of days. The largest ethnic group in Ecuador is the Andean Quechua, consisting of around 2 million people. The Quechua have preserved their culture, traditions, and language quite well. Distinguished by the Andean flute music, foods such as quinoa and cuy (guinea pig), beautiful wool ponchos, and colorful embroidered blouses, learning about the Quechua culture will no doubt be a highlight of Ecuador tours. 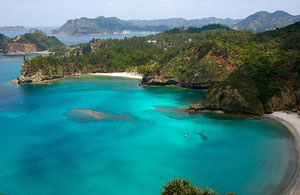 The official language of Ecuador is Spanish, but Quechua is spoken by the indigenous population. In addition to Spanish, there are about 10 native languages spoken in Ecuador. Roman Catholic influences some social behavior in Ecuador; many holiday and festivals are at least partially based on Christian beliefs.

People will greet with a handshake and a smile. Try using the appropriate greeting for the time of day:

Depending on formality, people that are close acquaintances will greet with a hug and a kiss on the cheek. Men embrace and pat each other on the shoulder. Women kiss once on the right check. Generally speaking, only close friends or family use first names. You should address people by the correct title, such as senor or senora. If someone addresses you by your first name, it is usually a signal that you can also refer to them by their first name. 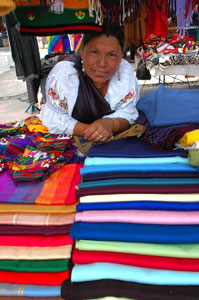 If you are invited to someone’s home it is a sign of friendship and should be considered an honor. It is polite to bring flowers, wine, pastries, or sweets for the host. Avoid giving lilies or marigolds, as they are used at funerals. Guests will be served first, and the host will say buen provecho (enjoy your meal) as an invitation to begin eating. Ecuadorians take their time and enjoy lively conversation during meals. It is considered polite to leave a small amount of food on your plate when you are done eating. If you do not want more to drink, leave some liquid in your glass.

Punctuality is not as important in Ecuador as it is in the United States. Ecuadorians do not adhere to strict schedules. For example, if you are invited to someone’s home you should arrive a little late. The bus, train, and plane schedule will be on time for the most part. However, showing up for a function an hour late is very common (not that you necessarily should).

Ecuadorians are very warm and welcoming and generally feel very comfortable standing close to each other while talking. They often use hand gestures and body language as a means of communicating. Here are a few things to keep in mind:

More upscale restaurants will add a 10% service charge to the bill. If the service has been good, consider adding another 5% for your server. Cheaper restaurants don’t include a tax or service charge, so if you want to tip your waiter do so directly, don’t just leave money on the table. Locals don’t always tip, but visitors to Ecuador often do. Taxi drivers are not usually tipped. On a group tour you should tip your guides about $5 per person a day, while on a private tour you should leave $10 per person per day or more. If you are going on a long tour that involves guides, cooks and crew you should tip more. For example, on Galapagos safari camp tours, a tip of about $75-100 per traveler per week to be distributed among the staff is standard.

Your passport should be valid for six months after your return date. Legally you are required to have your passport with you at all times. An advance visa is not required for US citizens.