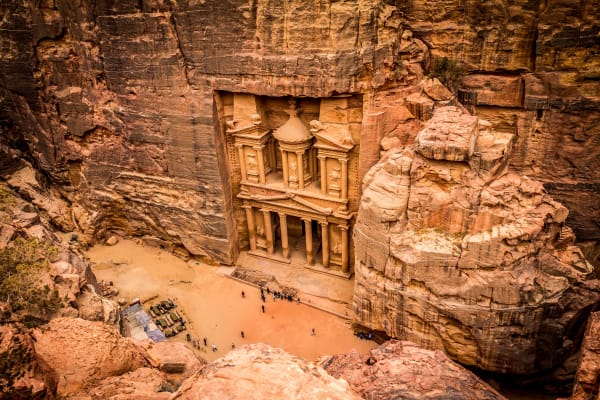 Setting off from Wadi Musa early in the morning, descend a slight incline and begin to weave your way through al-Sīq (the Siq, or the Shaft) the narrow sandstone gorge winding towards the Lost City of Petra. The ¾ mile long fissure is about 10ft across at some of the narrowest points and the walls resemble those of slot canyons as they were smoothed by water long ago. Perhaps not ideal for the claustrophobic traveler, when looking straight up its nearly 300-600ft walls, a thin slice of the sky can be seen above.

Along the pathway, you can spot columns, statues, alcoves, and other remnants of ancient civilization. Hear the echo of hooves as horse carts pass by, carrying those who aren’t up to the morning stroll. This meandering passage leading toward the historic stone carved ruins ahead is the perfect approach, building up anticipation for the mystery and splendor of the “Rose City.” 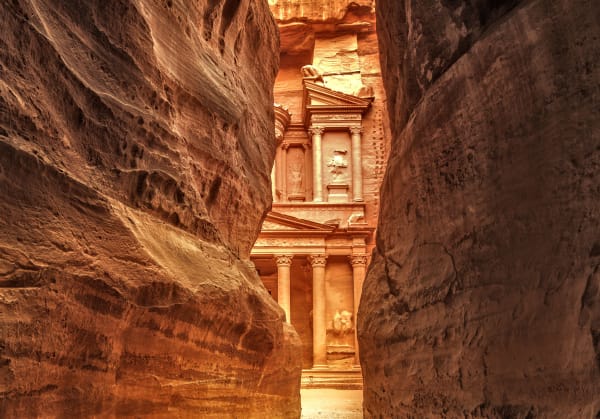 Rounding the last bend, you catch your first glimpse inside Petra. A sliver of Al-Khazneh (The Treasury) peeks through the canyon’s opening. Photos cannot do justice to the beauty of Al-Khazneh’s facade delicately hewn into the sandstone. Absorb the full scene of natural rock walls juxtaposed with the intricately carved temple and the open blue sky.

When the Nabataeans constructed Al-Khazneh in the 1st century AD, they never could have imagined how the site would one day become synonymous with their culture as well as the symbol of the country. The building was initially a crypt and mausoleum and a few of its sculptural details trace back to ancient beliefs of the underworld and afterlife, like eagles which were believed to carry away the souls of the departed.

Beyond The Treasury, Petra is home to numerous tombs and archaeological sites and hiking opportunities like the Street of Facades, the Great Temple, El Dier (The Monastery), Roman Theatre, and the High Place of Sacrifice said to have the best views. You could easily spend a day exploring the sites and then be rewarded with a stunning sunset and final candlelit view of Petra by night before returning to Wadi Musa to retire for the evening. For entrance to the sites of Petra, costs vary depending on your length of stay in Jordan. 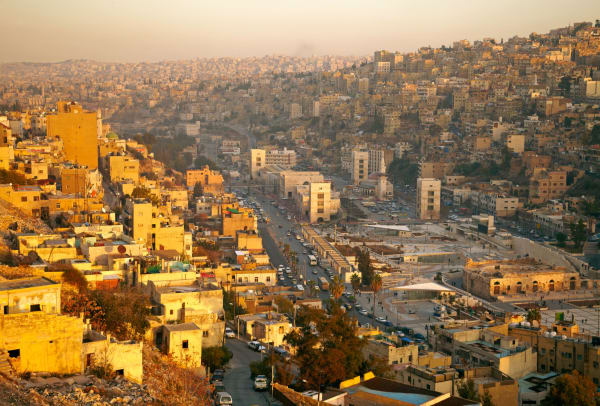 Most travelers will arrive either by air, into the capital of Amman, or by border crossing from Israel. Amman is home to the Citadel ruins, a historic site in the center of the city. Within the Amman Citadel you can find popular sites like the Roman Temple of Hercules including fragments of a once grand statue, now just the “hand of Hercules” and a lonely elbow remain. You can also visit the Umayyad Palace Complex, believed to have been built before 743 AD, known for its large water cistern which supplied water throughout the settlement, a highly decorated audience hall with recently restored dome, and ruins of buildings which made up the central areas of the palace.

For something completely different we suggest a stroll along Rainbow Street to admire the colorful graffiti art, take a break at a shisha/hookah bar, or have a bite to eat and a drink at a local cafe. 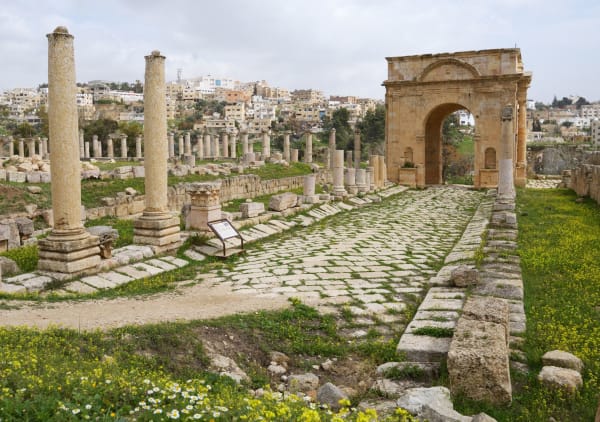 Ruins of the ancient Roman city of Jerash.

Jerash, just a 45 minute drive from the capital, is a less frequently visited yet excellent archeological site and makes for an excellent day trip. The location was home to numerous peoples in its history, dating back as far as the Neolithic Age. Excavation continues today and more is waiting to be uncovered about this fascinating city. The Greco-Roman monuments and remains in Jerash are one of the best preserved sites of Roman architecture in the world as well as one of the largest. 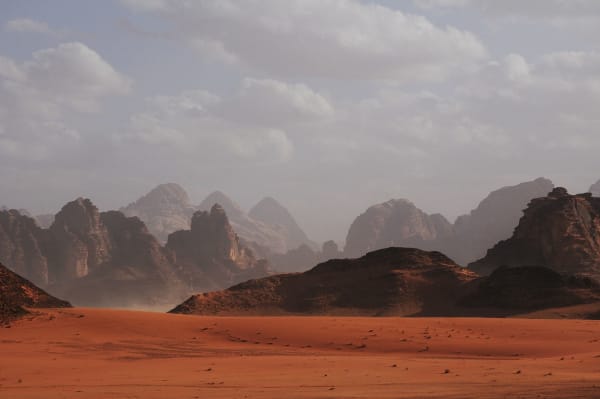 Known as the “Valley of the Moon'', Wadi Rum, in the south of Jordan is the largest wadi (ravine that is dry outside of the rainy season) in the country. Its history of inhabitants dates back to prehistoric times. Petroglyphs, believed to be from the 8th century BC, Nabataean temples, and remnants of other cultures can be found within Wadi Rum.

This area was primarily brought to the attention of the West by T.E. Lawrence (of Lawrence of Arabia fame) due to its stark beauty and adventurous appeal. Today, it is a popular site for trekking, 4WD adventures, stargazing, and photography. The bright red sands and unique sandstone formations have been a favored filming location depicting the planet Mars in many movies as well as fictional planets in Dune, Prometheus, and several Star Wars films. 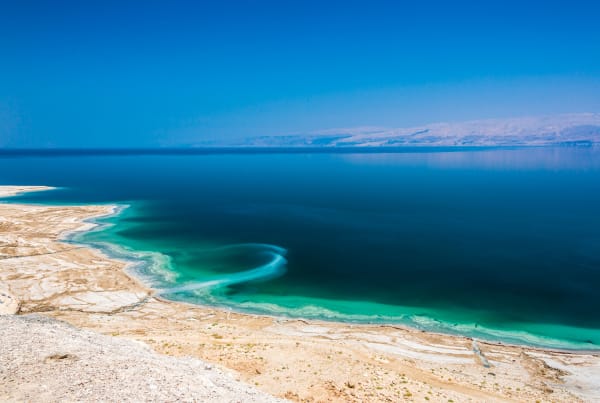 The stunning blue waters of the Dead Sea.

If you’re looking for some relaxation amidst your active and historically focused Jordan Tour, you may want to escape to the Dead Sea for a day or more. The lake is bordered by Israel and the West Bank to the west and Jordan to the east, and its northern tip lies a little over 1.5 hours from Amman by car. The salt lake’s shores are 1412 feet below sea level making it the lowest exposed land on earth, and are an ideal spot for swimming and sunbathing outside of the winter months. Floating in the hypersaline waters and enjoying therapeutic spa treatments, incorporating the lake’s mineral rich mud, are popular ways to pass your time. You may wish to take a day trip to Mujib Nature Reserve to cool off on the gorgeous Siq Trail. Sunsets over the Dead Sea are particularly beautiful from the Jordan shoreline.

The Lost City of Petra is on many travelers’ bucket lists for good reason, but there is so much more waiting to be discovered in Jordan. For those craving archaeological ruins, adventure, otherworldly landscapes, and rich culture, our Jordan tours have you covered!