How to See Sumo, Seriously in Japan

Japan is a familiar place, whether we as Americans recognize it or not. Think of a foreign culture with more instantly recognizable symbols. Samurai, geisha, castles, cherry blossoms, anime cartoons. Despite this, between the language and the private nature of its people, Japanese culture can be a tough nut to crack. Global Basecamps' Japan tours aim to change this, by making it as easy as possible to experience old and new Japan. In an effort to pierce the veil just a bit before your trip, we will do our best to outline what to expect in a common day at a sumo wrestling tournament.

Where to See Sumo

Japan’s most popular tournaments are held in a rotation throughout the year in Tokyo, Osaka, Nagoya and Fukuoka. These cities all have international airports and are easily accessible by other means, but foreigners tend to attend Tokyo and Osaka tournaments in greater numbers. Of these, the most popular venue by far is Tokyo’s Kokugikan, which hosts the January, May and September tournaments and seats 13,000 people. 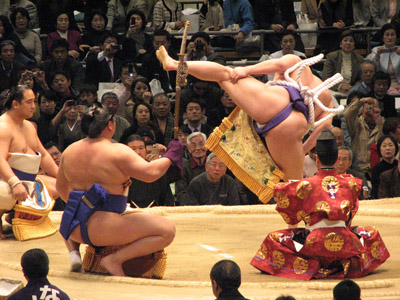 A Day Of Sumo

A tournament lasts for fifteen days, and barring some stand-out days, like the opening and closing ceremonies, each day features a similar schedule. The events throughout the day are as much a cultural education as a physical spectacle or sport. Reading through the day’s events, one notices how important the ceremony of individual aspects (the hair, the music, the ring itself,) matter to the proceedings.

Thus begins the part of the day that everyone has been waiting for. The dohyo-ri, or ring-entering ceremony, introduces the day’s athletes. An intermission follows, in which is explained the history of sumo, and the ring it is done in, and the ceremonies throughout. Before each sumo match, the wrestlers have about four minutes to prepare themselves in the ring for the action ahead while their careers are introduced. The bouts that follow, beginning with the youngest and least experienced wrestlers, are quick storms of action, preceded and followed by minutes of deep ceremony. The most exciting and experienced wrestlers take the ring at about 3pm, which is a perfect time to arrive at the venue if one does not want to spend the entire day there as described. The sumo matches end with a traditional bow twirling ceremony, followed by the day’s closing ceremony, and on the final day of the tournament, the presentation of the coveted trophy. 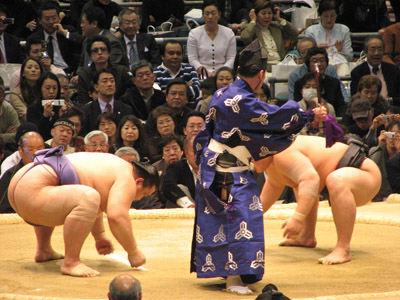 How to See Sumo: Seat Types

Sumo-goers have a few options when it comes to seating at a sumo venue. Typically, there are three types of seats. The most expensive of these, and the most sought-after, are the ringside seats. One can think of these as a “splash-zone” of sorts, as wrestlers have been known to fly into innocent bystanders from time to time. Next up, you have box seats that are spread across the stadium floor at different distances from the ring. These boxes generally have four cushions and if you want a box, you must buy all four available seats. Following are stadium seats which feature Western-style seating and vary in price depending on proximity to the ring. The least expensive are purchased on the day of the tournament, though availability is not guaranteed!