The Great Wildebeest Migration: What It Is & How To See It 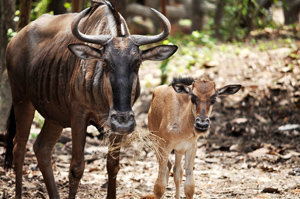 If one were to look at a wildebeest by itself, one might not be completely impressed. They are less graceful cousins to the antelope, and kind of ugly. Maybe the best thing that can be said about the wildebeest is that it places a high value on family. So high, in fact, that the annual movement of one group of wildebeests in the Masai Mara has become one of the world’s most sought after natural spectacles.

This spectacle is known as the Great Wildebeest Migration, capital G, W, M.

Thousands of travelers every year come to eastern Africa simply because they want to see the Great Migration, and use companies like Global Basecamps to ensure they get the best views of its river crossings, courting, birthing and all the rest of the drama. Our Travel Specialists know exactly which safari camps can fit both your budget, and your wildlife viewing priorities. Even better, some semi-permanent camps migrate along with the wildebeests, maintaining their prime location for game viewing.

The big catch is that by definition, it never stops moving. The Migration spans two different countries, and about 40,000 square kilometers that define the Serengeti Ecosystem. Thankfully, it’s predictable enough that one knows where the wildebeests will be during any given month. Wildebeests follow the food (mainly grass), and wherever vegetation is greenest - there you will find them. (Climate change is making this annual schedule more difficult to predict.)

Can’t get enough Africa? Trying to decide exactly which safari destination fits your priorities? Download our free travel guide to help narrow down your choices!