Be a Successful Digital Nomad in The Travel Industry 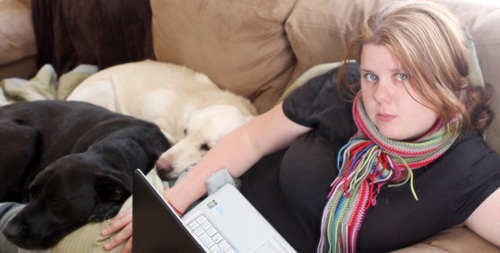 If you love to travel, which if you are reading this I assume you do, the standard 9 to 5 and two week vacation a year job can definitely cramp your style. The good news is: winning the lottery isn’t your only way out of the rat race. In our search for the best in travel blogs, we’ve found someone who will not only inspire you to follow your vagabond dreams, but who can help you plan your escape and become a successful digital nomad. Christine Gilbert, creator of AlmostFearless.com ditched her Fortune 500 corporate job in 2008 and has been traveling and working as a freelance writer ever since. With the tagline "Work Wirelessly. Travel the World. Do Anything." it isn’t surprising that her site has become one of the most popular travel blogs on the web. She is currently living in Bogotá, Colombia and will be on her way to Thailand in September. What we admire most about her is her passion for empowering others to follow in her footsteps and make their long-term travel fantasies a reality.

Global Basecamps: When was the moment that you realized you'd become a successful digital nomad? (That it was no longer a dream or an experiment?)

Christine Gilbert: There were two moments. The first came pretty quickly after I had quit my job and arrived in Spain. I thought, "I love this, and I'm never going back." It didn't hurt that I had landed some writing work and people were reading my blog. I felt like a writer with a capital w for the first time. The second time was after I had my son this year. I took an informal maternity leave in March and my site and revenue went up, despite my neglect. I realized that this thing I had built took on a life of its own. It really helped me just embrace what I was doing online, where a year ago I was still trying to decide if I wanted to be a novelist or a guidebook writer or a magazine editor. It felt like, okay, this is my life now. Also, I had some concerns that having a child would change my travel DNA so to speak, that I wouldn't crave it anymore. That didn't happen at all. In fact, I'm looking forward to showing him the world and experiencing it with him. He makes me want to travel more, not less.

Global Basecamps: You've written about the premise of “Round the World” trips being flawed. If you had only a year to travel, how would you approach it?

Christine Gilbert: I think that RTW trips are flawed because people treat a year off from work or school as their last ditch effort to travel, and then it's all over. If you think like that, you're putting an insane amount of pressure on yourself. Instead, try to think about it as a year to learn. Turn it into your own personal graduate program. For me, that would mean learning a language that is wildly impractical -- like Icelandic or something. I'd probably want to learn something in the arts, like how to throw pottery. I might take up a sport, and since I'm such a water baby, it would likely be diving or surfing. And finally, I'd want to do something with food, maybe an apprenticeship at a French bakery. So that would be my year... three months in four different places... maybe Iceland, India, Honduras and France. I feel like I would personally enjoy that experience so much more. The act of traveling -- taking a plane, train or driving -- is such a drag. I know people love the RTW concept, so what do I know? To me though, the best part of travel isn't the sights, but it's who you meet and what you learn.

Global Basecamps: And if you only had 2 weeks, where would you go?

Christine Gilbert: Right now? Central America. I think if you're traveling for a short period of time, you might as well stay nearby. Jet lag can take days to recover from and who wants to shave even more time off their trip? I would probably go back to Belize because it's so chill and you can go from beach to jungle in an hour.

Global Basecamps: Your lifestyle inspires many people, but sometimes the grass looks a lot greener when you are stuck in a cubicle. What is most challenging about being a digital nomad? Do you miss anything about your former lifestyle?

Christine Gilbert: Oh definitely. There are things you sacrifice for this lifestyle. For my husband and I, it hasn't been that big of an adjustment, as our families are spread out all over the country and both of our parents have left the places where we grew up. There isn't a home for us to even return to at this point. We've also moved a lot because of my former career and I traveled to client sites in my corporate days. I know how to live out of a suitcase and keep in touch with people virtually. For other people, I would imagine that this is a lot harder. I've met kids on their gap year abroad who were just sick over missing home. Sometimes people don't make it. It's definitely not for everyone. Especially if you have a really well established community and family life -- it's hard to leave that behind.

The things I miss the most: ice in my drink, air conditioning, hot showers, my big bed, not having to carry my stuff everywhere, TV, and good shampoo/conditioner. But after a week I usually forget all about it, and by the time I return I feel like an alien in the supermarket, shivering in the AC and unable to choose which butter to buy from the 30 choices.

Global Basecamps: You've written 2 E-books to help people transition into a wireless life of travel, What's your number 1 tip for someone considering this path? 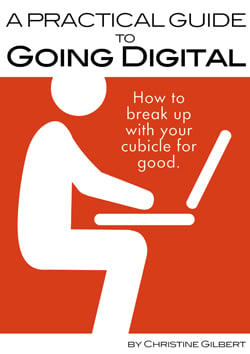 Christine Gilbert: Look into working for an employer remotely. It's probably the most overlooked option and the easiest. Many people try to become freelancers or sell something online, but this is starting a business. If it's your first business, that's quite a learning curve. Instead, I'd look into working for a consulting firm, temp agency or any employer that has a work-from-home program first. Your pay will be much higher than your first few years of starting a new venture and you'll likely get benefits like health insurance. The work is more stable. All around, it's a much safer, easier way to go. How do you find these jobs? Look on the regular job boards like Monster, Hotjobs, and Dice, etc. for telecommuting jobs. Look outside your normal field even. If an employer offers even one job that is remote (even if it's not a fit for you) you can bet that they are open to working with you. If you have to, consider taking a pay cut to make it happen. Once you're living outside the US, your cost of living will be so low it won't matter.

Global Basecamps: You've also written an E-book about Twitter, how has social media enhanced your travels?

Christine Gilbert: I use Twitter all the time for planning travel. I'll shout out to folks for recommendations and typically I'll get 4-5 responses within the hour. The tourism boards for countries/cities/regions have also gotten more tech savvy, so you're likely to get a response from them as well. They can be extremely helpful in planning a trip, even if you're an independent traveler. (Follow Christine on Twitter @AlmostFearless)

Global Basecamps: Your next project is a documentary, tell us about it.

Christine Gilbert: It's called The Wireless Generation and it's about the people we call digital nomads: the men and women who work on their laptops and travel the world. Over the next year, we're traveling from country to country, interviewing some of the most interesting digital nomad and giving a glimpse into their lives. Our goal is show many different ways of approaching long term travel, for any stage of life. There will be families with young kids, couples, solo travelers, cubicle escapees, retirees, teachers, business owners, freelancers, corporate MBAs and so on. If you'd like to participate in the film or recommend someone for us to interview, email me at christine.gilbert@gmail.com.

To follow Christine's wireless adventures, you can read her blog and purchase her E-books at AlmostFearless.com .