Things to Know on Nepal Tours 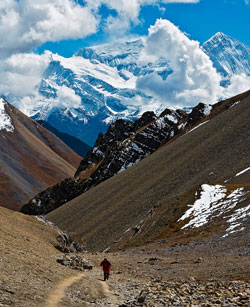 Nepal is one of the world’s premier adventure travel destinations. Nepal’s trekking options are endless. Rivers wind down the snow-capped mountains, creating some of the best river rafting and kayaking opportunities in the world. Discover the traditional architecture and holy temples in Nepal’s ancient cities to learn more about the country’s fascinating culture.

Nepal is about 54,363 sq miles with a population of approximately 30 million. The largest city, with more than 1 million people, is the capital, Kathmandu. Many visitors, drawn to Nepal by the unique eco tours, leave equally enchanted by the friendly demeanor of the Nepali people. Nepal is one of the best budget destinations around the world.

END_OF_DOCUMENT_TOKEN_TO_BE_REPLACED

Tales From the Lost World

Our well traveled intern, Temo, has written another great blog for us about his time spent in Venezuela. Read more about his adventures in his previous blog posts, Climbing El Pico de Orizaba and Exploring Northern Baja.

END_OF_DOCUMENT_TOKEN_TO_BE_REPLACED

Temo, an intern at Global Basecamps, has written another blog about his travels to Mexico. Read more about Mexico tours in his previous blog post, Climbing El Pico de Orizaba.

Northern Baja California is one of the most extensive, solitary and naturally beautiful places in Mexico. With over fifteen years exploring the peninsula, I have found a wide variety of experiences and natural landscapes that are as unique and beautiful as any other in the world. If you are looking to get away from it all and find solitude, you don’t have to go so far or spend much to find that perfect beach or unique vacation experience. Remember that an ecotourism vacation starts with the destination you choose and what better way to reduce your carbon foot print than to skip the flight, carpool with friends or family (if you're close enough) and still find a natural paradise. In Baja, solitude, peace, relaxation and fun are all wrapped up in a beautiful pristine natural environment.

You should start by driving past Tijuana and Rosarito and continue south on the toll road to the port city of Ensenada, which can be your first stop. Known as a tourist town, Ensenada acts as a great base from where to explore the many options in northern Baja. The city has a wide range of affordable accommodations and a diverse mix of restaurants for any palate or budget.

END_OF_DOCUMENT_TOKEN_TO_BE_REPLACED

One of our interns, Temo, recently traveled to Mexico and climbed the tallest mountain in the country, El Pico de Orizaba. Below he shares his experience with us. Thanks Temo!

Mexico has been receiving some terrible reviews and travel warnings for tourists because of the violence and insecurity issues it is currently facing. But the reality is that the violence has seldom been directed to Mexican tourists and even less towards international tourists. The social situation has led to a major decline in tourism across the country and at the same time it has created some great opportunities for the savvy traveler and the budget conscious adventurer. Many small hotels and tour companies are eager to give special discounts during almost any season. This is how I found a great deal for my Mexico ecoturism adventure.

Last winter break (December 2010) I decided to rediscover some of my heritage and also challenge myself physically and mentally on a journey of self discovery. So, on my Mexico tours I decided that I wanted to climb El Pico de Orizaba, also known as Citlaltepetl (which means the Star Mountain). At 18,800 feet it is the tallest mountain in Mexico and the third tallest in North America, only after Mt. McKinley and Mt. Logan in Canada. It is located in between the states of Puebla and Veracruz, almost a 3.5 hour bus ride from Mexico City.

Since I am based out of San Diego the easiest way to get there was to fly out of Tijuana International airport towards Mexico City’s Benito Juarez International Airport. Upon arrival, and prior to the 3 hour bus ride to Puebla, I wanted to make a quick day trip to the beautiful ancient Holy city of Teotihuacán just an hour drive from the airport. The immense and beautiful temple pyramids of the Sun and Moon are one of my favorite places to visit in Mexico. It is said that ceremonial rituals were carried out at the tops of these perfectly constructed engineering marvels and were coordinated with the movements of the sun, moon and stars.